Contrary to the title, this post will actually start with chuckers -- pumpkin chuckers, that is.  Moab's Youth Garden Project sponsors a pumpkin chuckin' festival every fall.  We went last year and had a great time.  This year, I got the hair-brained idea to actually build a chucker and enter the contest.  Can't be that difficult, right?

Well, John was willing to help me out, which actually surprised me, but in a good way.  He had a new garage full of tools, and I guess building machines that throw things is an interesting enough pastime for most guys.  My brother, the engineer, suggested building a trebuchet, so I got to work.

I found plans for a small trebuchet -- one foot high -- online, and we started with that.  It was a cute, little thing that would throw a golf ball a good two yards when everything lined up well.  We used coins for the counterweight.  The kids had a blast cocking it and firing it.  It was pretty easy, so I thought, why not scale it up a notch or two and build something that could launch an 8 to 10 pound pumpkin.  Do you see how my enthusiasm was already getting the better of me?

I'm on the Parent Council for the charter school my kids attend here in Moab, so I talked the officers into letting me spearhead the project and register it as the charter school's entry.  They were thrilled.  They volunteered their time and access to supplies with which to build the thing, so I got to work.  (By that I mean John got to work, and I tried to stay a step ahead of him.)

Our test launches at the house were okay, but we were using a smallish block of concrete for a counterweight, and it wasn't heavy enough for an 8 to 10 pound projectile.  Some of them are posted on Facebook with my name tagged, so if you are terribly interested, you can look there.

The day before the festival, we took the trebuchet to the field and set it up for the competition.  We used about 25 pavers as the counterweight.  When we got it all locked and loaded, the trigger mechanism didn't work.  So I called John, all frantic, to come fix it.  He came up a with a great idea for a new trigger mechanism that worked swell and our launches with water bottles were hitting consistently past the 50 foot mark.

Saturday morning dawned bright and fair.  We set up for the exhibition launch with the pumpkin decorated by the kindergarten class (each class at the charter school decorated a pumpkin for launching).  The kindergarten pumpkin, slightly under competition weight, flew almost 75 feet!  We were thrilled.  Then we looked at the trebuchet.  The axle was totally bent, and the wood of one of the uprights had split.

I called John, frantic again, to come fix it.  We got a new axle and clamped the split wood back together.  We got three launches in, as required by the competition, but none of them went as far as our exhibition launch.  On the last one, the supports holding the counterweight bucket broke, and the bucket fell off upon launching.  It was pathetic.  But we still won!  (We were the only entrants in the adult trebuchet category).  Here is a video of the final launch:

I don't know how well that video's going to load.  In the meantime, here are some pictures of the kids' Halloween costumes.  Elijah was supposed to be batman, but he never would put on his costume, so he went trick-or-treating as Elijah. 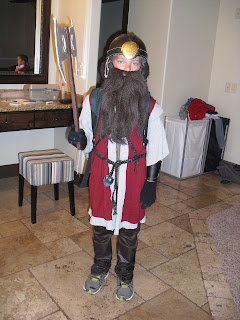 Joe originally wanted to be Gollum.  I finally talked him into Gimli (from LotR).  I think the costume turned out quite nice.  The main thing is, he was happy with it. 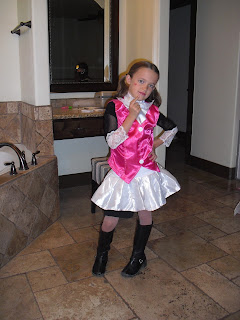 Priya is some vampire girl from Monster High (barbies that look kind of like monsters and cost $30 a pop).  She loved it, so that's what matters. 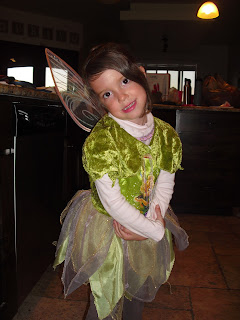 And, of course, Auralee really enjoyed being Tinker Bell, although she was not happy when she discovered that she actually had to pick up her feet when she walked or she would get the puffballs on her toes dirty.  It would have been so much easier if she could have just flown. 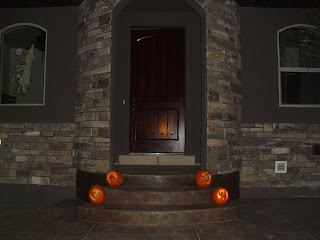 And this is about as Halloween-decorationy as we get around here.  Four carved pumpkins and a homemade witch taped to the office window.  Happy Halloween, everyone!
Posted by Shaunna at 5:02 PM 2 comments:

We're scheduled to have the appraiser in on Wednesday, which means we can start moving in after that.  So the next pictures I post will be pictures of our home, completed, with furniture.  But there's a lot of work between now and then, so I'll just leave you with these last few pictures. 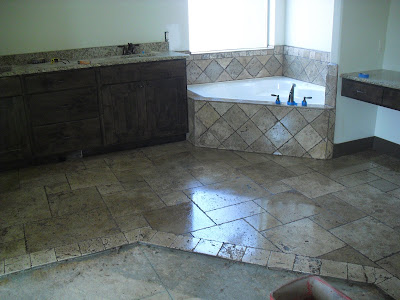 The travertine looks smashing once it's sealed, n'est pas? 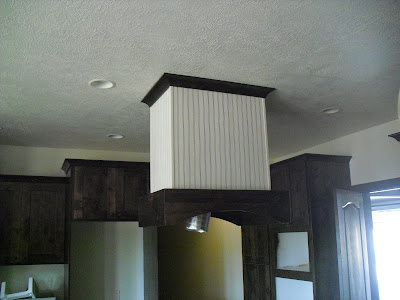 This is the oven hood. Ta da! 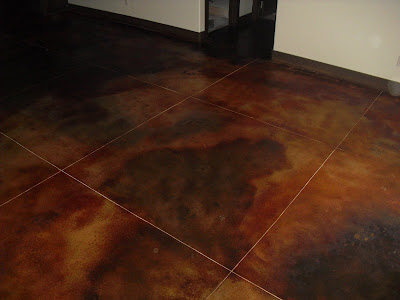 Here is a sample of the stain on the concrete downstairs. Kind of groovy. 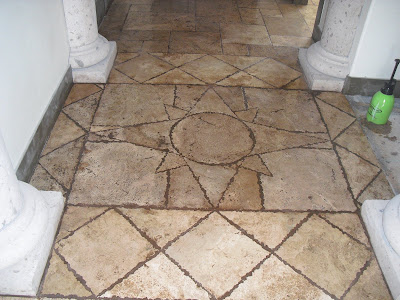 And this is what my mosaic looks like now that it's grouted and sealed. Makes a huge difference, right?


Okay, what really happened is that it is more difficult than you might think to get that many teeny tiles flat and even in the mud. I tried my best, but it was my first time. No matter how much they grouted and smoothed, it just didn't look professional. So Jared chipped it out and put that medallion in instead. It looks great, and I am not the least bit sorry. It was a fun experiment, and I might decide to do something like that again someday, but right now, I'm just glad that his mosaic looks as good as the rest of the house.
Posted by Shaunna at 3:53 PM 3 comments: 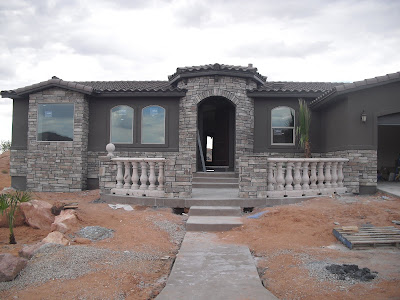 Whoa! Really starting to look like a house now.  There's really a lot more color in the stone they just laid, but I'm not very good at sunlight angles and things like that.  The front posts need lanterns, too.  Looks like a fun place to spend an evening chatting, though, doesn't it?
Posted by Shaunna at 8:09 PM 1 comment:

garage doors, paint, lights and granite, and a surprise 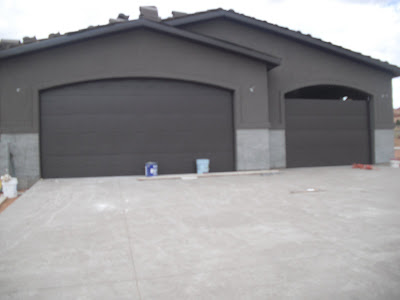 Here are the garage doors.  I know.  Super exciting. 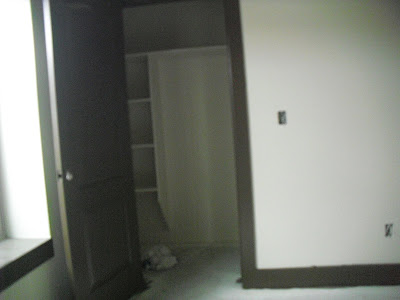 This is just a sample of the paint colors.  The trim is dark with the walls a lighter color.  I love it.  It looks very classy. 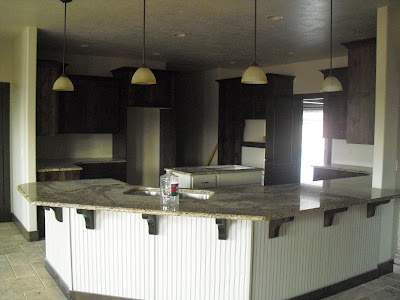 Here's a picture of the kitchen with the granite installed and the pendants above the bar.  Yes, that's a big bar.  I figure it will seat at least eight people.  If we put the leaves in the dining room table (all the while grateful for a dining room big enough to put leaves in the table), we can seat ten there.  So you see, we really are expecting you to come visit. 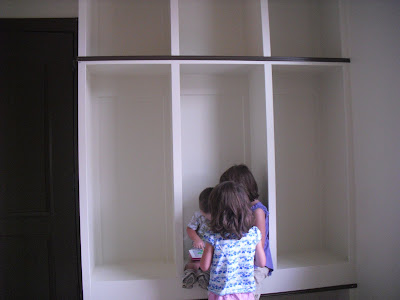 This is a picture of the shelving unit Jared built in the laundry room.  I was at the house on my birthday, working on the mosaic, and when I went to talk to him about something, he was building this!  He didn't even know it was my birthday.  Nor did he know it would be exactly what I wanted.  Well, he's probably figured that out by now.  So here it is, and I am so excited because my family will no longer have any excuse for leaving their stuff scattered all around.  This is the place to hold it all!
Posted by Shaunna at 9:45 PM 3 comments:

Cabinets (and the front of the house)

The cabinet maker (carpenter, I suppose) has been hard at work installing the cabinets this weekend.  I was most impressed when I was at the house on Saturday, working on my mosaic, and I heard him knocking on the walls to find the studs rather than using a studfinder.  John always tells me this is possible, but I've never seen somebody do it before.  Once he put the cabinets up, however, I was much more impressed with his carpentry than his stud finding abilities.  Of course, I have no need for that, having found my own stud ten years ago.  (Sorry.  Couldn't resist.  Not like he reads this blog anyway. :)

Here are pictures of the kitchen cabinets and the vanity from the master bath, as well as the view of the front of the house with more of the exterior courtyard completed and the final stucco color. The photos really don't do justice to the subject matter. Or maybe it's just the photographer! 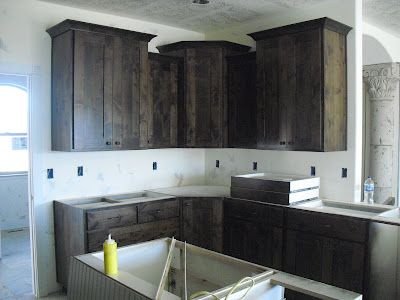 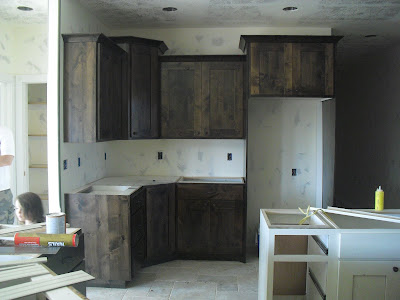 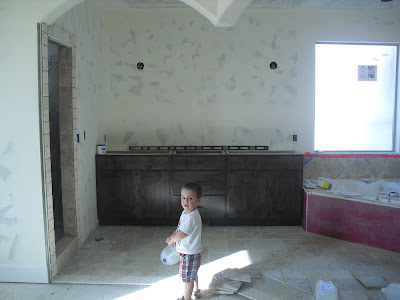 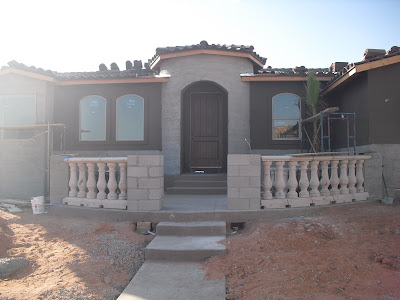 Jared did this little mosaic out of travertine in the master shower.  It's lovely, of course.  The whole shower is lovely. 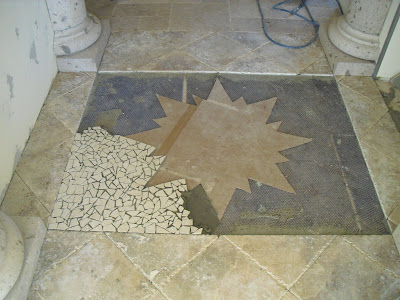 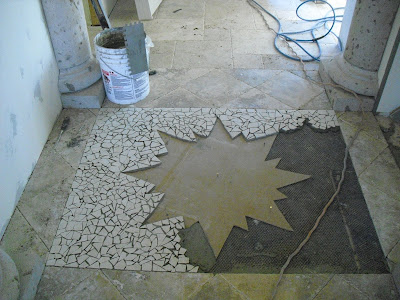 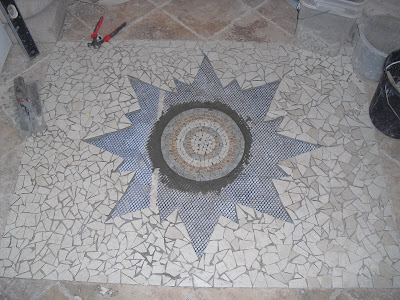 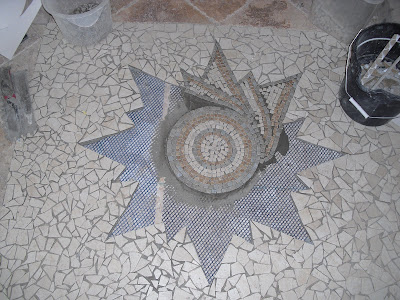 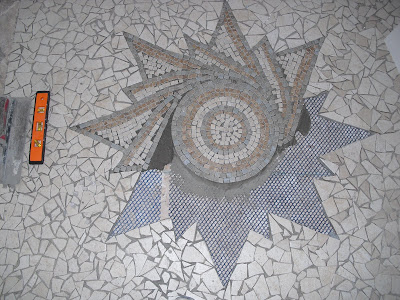 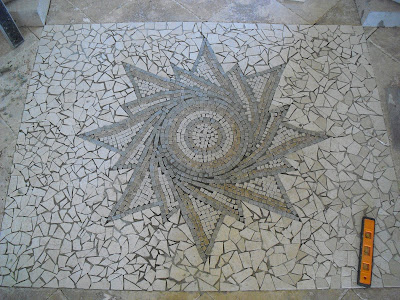 In retrospect, I realized I should have taken pictures every few seconds from a camera suspended from the ceiling and then I could have made a really cool, stop motion photography film.  But I didn't.  And I'm not redoing it.  In fact, I'll probably never do something like this ever again.  But I hope it'll look good when it's grouted and sealed.

We spent five days in Salt Lake City during Joe's birthday so I could run in the Ragnar with Ben, Wayne, Catherine, and Paige. The Ragnar was awesome and will be even awesomer next year when we get an entire team with family members. It's on my birthday next year, so that's all I'm asking of John: to run in the Ragnar with me. Anyway, they worked hard on the house while we were gone, so there are more pictures to post, and these are fun ones. Take a look! 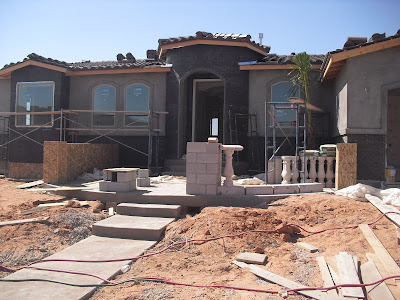 This is the beginning of the exterior courtyard. Actually, i have to go up and take more pics today because it's progressed further than that by now. 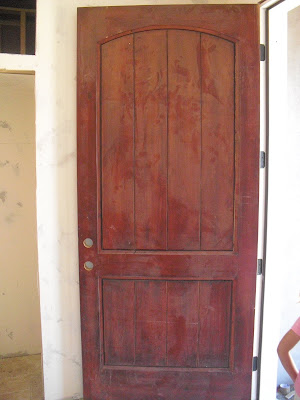 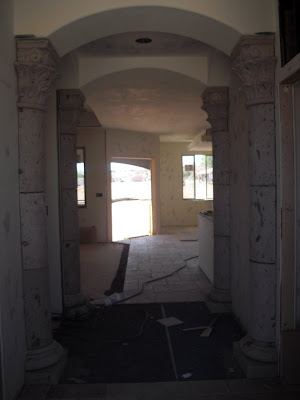 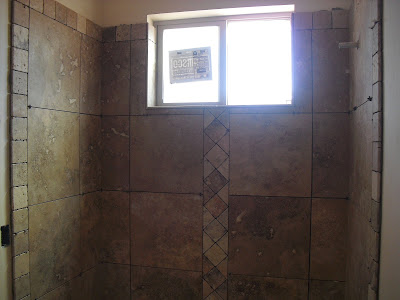 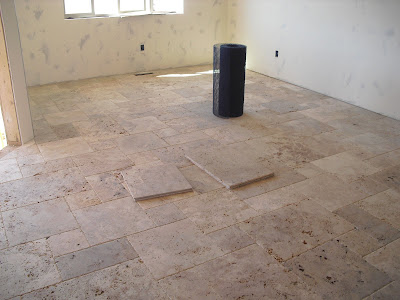 Versaille pattern travertine. Because I speak French. ;)
Posted by Shaunna at 3:00 PM 2 comments: